You must remember this: Casablanca at 75 – still a classic of WWII propaganda

Associate Professor in War and Society, Swansea University
Casablanca, which brought together the combined star-power of Humphrey Bogart and Ingrid Bergman, remains one of the best-loved movies ever produced in Hollywood. But the film, which hit the silver screen on November 26 1942, is more than just a love story set in Morocco. Released in the aftermath of the Japanese attack on Pearl Harbor – which propelled a reluctant United States to enter World War II – the film was actually a classic piece of propaganda cinema masquerading as popular entertainment.﻿ 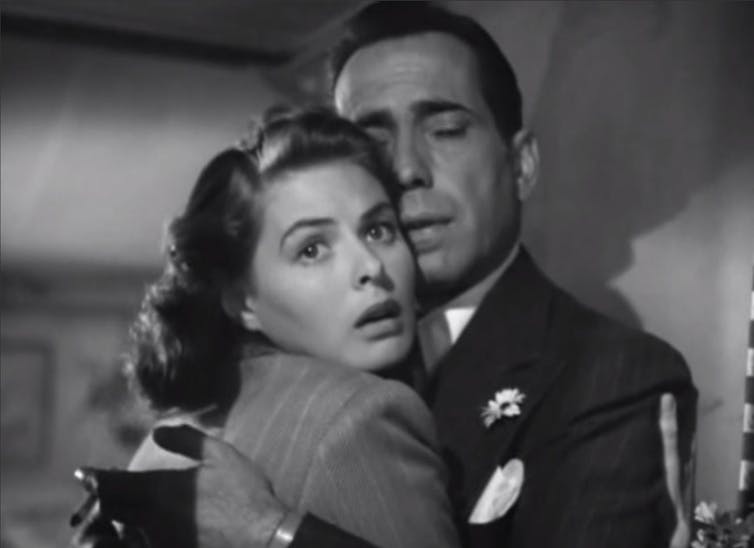 When war broke out in Europe in September 1939, the United States was the only major power with neither an intelligence nor a propaganda agency. But this all changed after the attack on Pearl Harbor in December 1941. Just as intelligence would be essential for shaping and directing political and military objectives in Europe and Asia as the conflict spread, propaganda would be vital for supporting the American war effort by shaping and directing American ideas and beliefs in relation to the conflict. 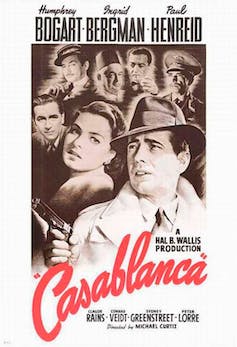 In June 1942, the office of war information (OWI) was set up to promote the war effort and was given the task of developing campaigns to enhance public understanding of the war at home and abroad. A key element of this was the co-ordination of government information activities, as well as liaising with the press, radio, and – crucially – motion pictures.

In effect, the OWI was charged with selling the war. After experimenting with propaganda in the form of posters and documentaries, the OWI turned to more imaginative sources. Its director, Elmer Davis – formerly a reporter with the New York Times and CBS – made this key observation:

The easiest way to inject a propaganda idea into most people’s minds is to let it go in through the medium of an entertainment picture when they do not realise they are being propagandised.

Hollywood would play a significant role in this. For box office reasons as much as political ones, Hollywood was eager to harness the medium of entertainment to support the war effort. And so several popular films made at this time – including Mrs Miniver (1942), The More the Merrier (1943), This is the Army (1943), Since You Went Away (1944) – combined traditional artistic and entertainment concerns with a purposeful political dimension.

The agency issued specific guidelines, as well as reviewing scripts and early cuts of films, making suggestions for insertions or deletions. It required film makers to consider seven questions before producing a movie:

At the heart of Casablanca is a concern with the implications of American isolationism in the context of the threat posed to Europe by Nazism.

Elements of the dialogue between characters in the film echo and then argue with contemporary American foreign policy attitudes – offering reasons to engage. Bogart is perfectly cast as cynical bar owner Rick, an American formerly living in Paris who has fled the German occupation to open his Café Americain, which has become a melting pot of wartime nationalities. Rick advances what had traditionally been a popular American justification for isolationism:

I stick my neck out for nobody. The problems of this world are not in my department. I’m a saloon keeper.“

But for Roosevelt’s administration – and for increasing numbers of Americans – the attack on Pearl Harbor had shattered any lingering illusions that America might turn its back on the world. From this perspective the story of Casablanca is the story of Rick’s transition from aloof to engaged. This is made explicit by the owner of the Blue Parrot cafe, Signor Ferrari (Sydney Greenstreet), who tells Rick:

My dear Rick, when will you realise that in the world today, isolationism is no longer a practical policy?

But more dynamic than these relatively subtle pieces of dialogue is the famous scene where Rick clearly takes sides, showing the audience who he believes are the heroes and the villains of the European conflict.

A contingent of German officers is singing nationalist songs. Victor Lazlo (Paul Heinreid), a heroic resistance fighter who represents the nobility and sacrifice of the oppressed Europeans, demands that the band play La Marseillaise, the French national anthem. The band look to Rick, who nods assent and in that nod he relinquishes his isolationism. The anthem is rousingly played and the Nazis, who initially try to sing more loudly, are drowned out by the patrons singing in unison and they give up. By identifying with Rick, moviegoers were encouraged to make the same choice.

Casablanca is a dramatic, heartbreaking movie, an unsurpassed classic from Hollywood’s golden era. But it is also an extremely effective piece of propaganda cinema, persuading an American audience reluctant to commit to another European conflict to set aside its isolationism simply by dramatising the heroism of the European resistance to Nazi Germany.